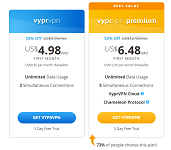 Golden Frog VyprVPN is the only VPN company to develop, own, and maintain their own VPN infrastructure. This means all customers' connections run through their own hardware and network, and ensures that no 3rd parties have access to customer data. This also allows them to more quickly make changes and quick-fixes on our network as needed. This gives VyprVPN customers faster, and more reliable VPN connections.

VyprVPN has one of the largest global VPN networks with following indicators:

VyprVPN offers PPTP, L2TP/IPsec, OpenVPN (160-bit and 256-bit), and their own proprietary VPN protocol called Chameleon. Vypr developed Chameleon in-house and it masks OpenVPN traffic to make it appear as though the user is not connected to a VPN. This means users in locations where VPNs are normally blocked can still access their service. This is why VyprVPN is one of the only global VPNs that works in China.